If you’re thinking of introducing agile and/or lean practices into an organisation and you’re wondering whether it’s even worth trying, it would be worthwhile spending a bit of time thinking about corporate culture.  Culture within an organisation is an incredibly strong force and introducing change is highly likely to fail if you don’t take it into account.

There are all sorts of complex definitions of corporate culture which deal with many different aspects of behaviour and attitudes.  I prefer the 4 types of culture defined by Handy, as they are simple and powerful definitions which allow people to get up to speed quickly and conversations to flow.

The power culture is one where a single person is the centre of the organisation.  They understand the strategy, they spin a web full of strands and they understand how each of those strands fits into the strategy.  Other people in the organisation only know about their strand and they do not know why their strand is important to the strategy as a whole.  This leads to discontentment and a high staff turnover.  This in turn confirms to the person at the centre of the web that they can’t rely on anyone else and reinforces their behaviour.

This type of culture can result from an entrepreneur who sets up an organisation and who wishes to keep a tight hold of the reins.

In a  task culture teams are formed to address issues or changes.  These teams work together collaboratively to deliver and once the work is completed the team is disbanded and the individuals are reassigned to new teams in order to address other changes.

In a company with a role culture a person’s role is the most important thing about them.  These organisations tend to be very hierarchical with the amount of influence a person has being directly proportional to how far up the hierarchy they are.

Handy pictured this culture as a series of pillars.  Each department is a pillar with people at the bottom having no power and the person at the top having a lot.  If the people further down the pillar want to communicate with another department the communications tend to go up through the pillar, across the top and down the other pillar.

In a person culture each individual is valued for what they personally can bring to the table.  When there is work to be done the best person for the job is chosen to do it, irrespective of management level or job title.  This type of organisation is already all about empowerment and the challenge can be in getting people to work together in a team effectively and collaboratively.

When you are thinking of introducing agile or lean to an organisation having a broad understanding of its culture will help in determining the best approach to take and the likelihood of success.  For example, introducing the techniques into a power culture, with a single all controlling individual, is highly likely to fail.  Even if the person asking you to make the change is the powerful individual themselves you will hit against the problem that empowerment is unlikely to be acceptable to them.  Whilst you may be able to put in a few practices you will never be able to create an environment where the full benfits of lean and agile can be realised.

The team and person cultures are both quite suited to the introducting of agile and lean.  Both cultures tend to benefit from high levels of empowerment and dedicated mentoring and coaching is likely to be highly effective.  The important thing here is to emphasize what it is about the current culture which works so well and which will also work well for agile and lean.  Showing respect for the existing culture is essential. 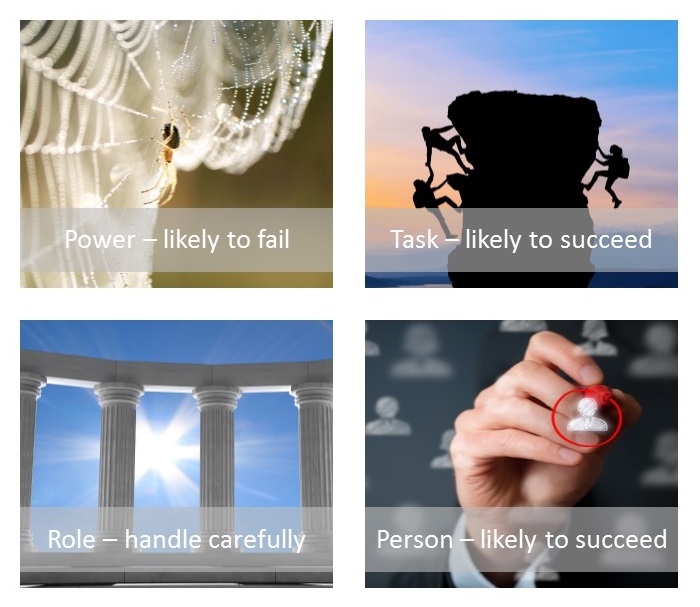 Introducing agile and lean practices into an organisation with a role culture can be very difficult, especially if the people at the top like their power and don’t understand the huge benefits of empowering the rest of the department.

The most effective approach in this situation is to have a passionate sponsor high up in the management structure, ideally at CxO level or above.  This is the type of organisation where the HiPPO (Highest Paid Person’s Opinion) is likely to be very important and having someone championing the agile and lean cause at a high level will have a huge impact.  Without that type of sponsorship it is likely that agile and lean will, at best, be a small area of practice in one department.

I have successfully introduced agile and lean approaches in a number of organisations, including one which had a strong role culture.  In that organisation the CIO had worked using agile before and understood the power it could bring, so he was a strong advocate of the approach.  He was also able to suggest at management strategy conferences that certain non-software issues were tackled using a lean approach.  I was concerned that it might be difficult for team members to be empowered within the culture and that the HiPPO might overly influence the group.  I was gratified to find that people took empowerment as soon as it was available and that when the higher level management saw the results they were convinced of the approach, including the empowerment.  It surprised me how easily the culture changed into a task based approach, at least for those pieces of work.  Interestingly, the only resistence I really encountered was around the fact that I’d stepped outside of my software role.  “Why are development running a business project?” is a question which I heard multiple times, both from within IT and from other departments.  To which my answer was “Development aren’t running a business project, I am.”.  It seems that in that organisation introducing aspects of a task culture wasn’t difficult, but introducing aspects of a person culture really was.

Techie skater and agile craftswoman with a passion for learning @IvanaTerrorBull

I am a Geeky Nerd